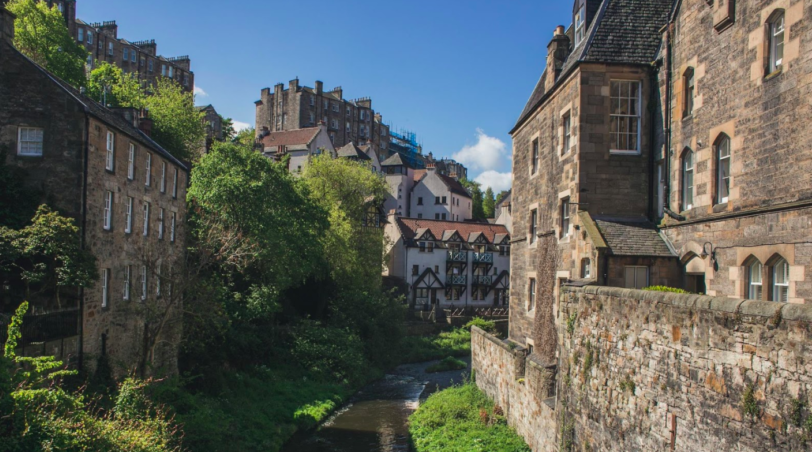 As our walking tours in Edinburgh couldn't be further from traditional, we wanted to offer some additional secret spots to add to your next visit to Edinburgh. And if you'd like some reassurance about taking our tours at this difficult time, find out everything we're doing to safeguard our guides and our guests from COVID-19.

Edinburgh continually ranks among travellers’ top cities to visit, not just in the UK, or even Europe, but globally. The city is vibrant, picturesque, and feels strangely timeless. This is why it has long been known as ‘the Athens of the North’. But if there’s one grumbling complaint that visitors often make of the city, it’s that they wish it was a little quieter, that the crowds were a little smaller. Who can blame them? Haven’t we all found ourselves in places of beauty and been jostled from our daydreams by a newly arrived tour group? Well, if you have felt this in Edinburgh — perhaps during festival season — think of Dean Village as an antidote. Once known as the ‘Water of Leith Village’, this residential area was the site of grain milling for over 800 years. A 30-minute walk from the centre of the city, the area is quaint, tranquil, and fairytale-esque.

Bring your camera and reserve plenty of time to wander along the waterside and through the village’s winding, narrow pathways. You won’t find any shops or eateries in the immediate vicinity, but the village is a short walk from the National Gallery of Modern Art where you can stop for food in the cafe and catch a bus back to the city centre.

Often overshadowed by the nearby National Museum of Scotland, the Surgeons’ Hall Museums are award-winning collections which give a fascinating insight into the history of medicine in the city. By the beginning of the 18th century, Edinburgh had become one of Europe’s great centres of learning. In Edinburgh, the ideas of the Scottish Enlightenment were put into practice in the city’s medical schools, and pioneering doctors and scientists conducted studies and perfected techniques that would go on to benefit countless numbers of the city’s sick. The museums first opened their doors to the public in 1832, making the museums some of Scotland’s oldest. The origins of the collections, though, go back much further, to the founding of The Royal College of Surgeons of Edinburgh in 1505. Visitors to the museums will explore the largest collections of surgical pathology in the world.

Among the exhibits on display, you will find artworks, surgical tools and apparatus, and specimens from patients and cadavers who were operated on within the college. Though this may sound grisly, the museums rightly point out that the collections are open to the public to further knowledge, and the museums pay tribute to those patients whose own sufferings allowed progress to be made in how we treat sickness and disease. This is a thought-provoking collection, and, ultimately, an inspiring one.

Edinburgh’s Museum of Childhood was the world’s first museum dedicated to the subject. This fascinating museum evokes all the wonder and creativity of childhood through a collection of artefacts from between the 18th and 21st centuries. The museum began as the private collection of Edinburgh councillor, Patrick Murray. Today the museum can boast of having more than 60,000 items within their collection. Many facets of childhood experience are explored within the museum, such as schooldays, holidays, and children’s clothing. Multimedia elements help to immerse guests in exhibits. A Victorian street has lovingly been recreated and younger visitors can dress up and partake in games. One of the standout pieces is an enormous doll’s house that contains 2,000 tiny items across its 21 rooms; it has been so finely crafted that it even has functioning lighting and plumbing systems. While a teddy bear brought to Britain by a child refugee from the Kindertransport brings a moment of real poignancy. This carefully curated and well-maintained museum should not be overlooked.

There is certainly no shortage of spooky attractions across the city of Edinburgh. In a city famous for its grisly stories of bodysnatchers and hauntings, there is a plethora of fine walking tours and guided experiences to choose from. Mary King’s Close, however, stands out for its expert combination of informative social history and theatrical storytelling. In Scots, ‘close’ is the word given for an alleyway. The buildings found here date right back to the mid-17th century and have been preserved underground for centuries due to the developments of Edinburgh’s new town being built on top of them. The close’s name is taken from Mary King, a wealthy merchant who once lived in one of the buildings. During the 1600s, tenements in the city were home to citizens from across the social strata.

But as the city grew and such areas became overcrowded, the living conditions deteriorated, leaving closes like this one vulnerable to regular outbreaks of disease. In 1645, the city was badly hit by the bubonic plague which had been sweeping across Europe. Plague doctors dressed in terrifying bird-like masks began administering to the sick, using the often dangerous treatments of the time to try and save the sick and stop the spread of the disease. On your visit, you will be guided through the labyrinthine streets by trained actors who bring history to life. To explore these ghostly warrens is a memorable experience in itself but the performance aspect of the tour adds colour to the history and you will come away with a richer understanding of the city’s past.

The Royal Botanic Garden of Edinburgh

Another overlooked place of serenity in Scotland’s capital city, the Royal Botanic Garden of Edinburgh is a place for reflection and leisure. Known locally simply as the Botanics, this enormous collection of plants dates back to 1670, making it the second oldest botanic gardens in Britain. Located in Inverleith, a suburb to the north of the city, the botanic gardens are easily reached on foot from the city centre, but far enough from the city’s main attractions to escape the crowds. This is a place to connect with nature and to allow your thoughts to float free in the calming environment. The site spans an impressive 70 acres, contains 10 glasshouses, and is home to over 100,000 plants. At a time when environmental issues are often at the forefront of our minds, it is deeply encouraging to witness the tender care that staff at the gardens put into their upkeep. From the Botanics, you will be able to enjoy marvellous views across the city, featuring the castle in all its glory.

There is much to love here and the Botanics offer themselves to repeat visits, but some of the highlights of the gardens are the Alpine Houses, the Chinese Hillside, and the historic Victorian-era glasshouses. For those with an interest in local flora, there are sections dedicated to native Scottish plants. You will leave the Botanics revitalised but with a renewed sense of just how precious our natural environment is, and how essential it is that we preserve it.

We’ve reached the end of our suggestions for five secret spots that shouldn’t be missed in Edinburgh. We hope you have enjoyed exploring these sites with us and that you have a wonderful time in the Athens of the North! If you have any comments or questions, please get in touch.