Invisible Cities is a social enterprise that trains people who have experienced homelessness to become walking tour guides of their own city.

We offer alternative tours to locals and tourists.

Invisible Cities is a social enterprise. We don’t believe in labels or stereotypes. We want to show that everyone has great potential, a fact reflected in our tour guides.

We train people affected by homelessness to become walking tour guides of their own city and offer these alternative tours to tourists and locals.

Our training focuses on confidence building, public speaking and customer service. We partner with professional tour guides to build bespoke tours and practice our routes. 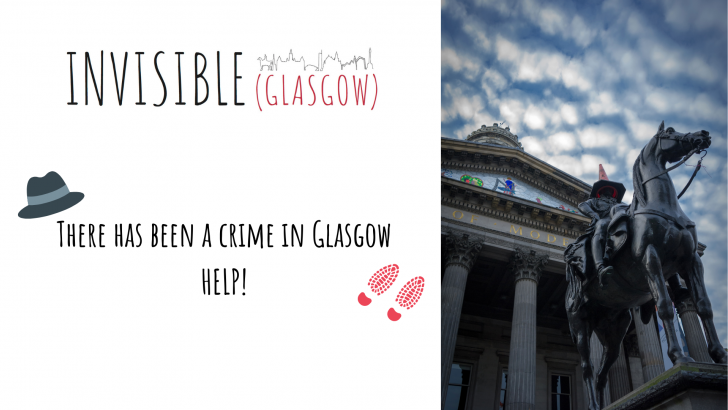 Invisible (Glasgow) is Calling out all Budding Detectives!

Introducing Manx Supporting Mancs... an exciting new Invisible Cities campaign where people in the Isle of Man (Manx) are supporting our team in Manchester (Mancs)!

The idea is simple: people in the Isle of Man can purchase a signed copy of Danny's 'Off the Cobbles' poetry book and all of the proceeds go towards Invisible (Manchester). Working in collaboration with Roisin Quinn in the Isle of Man, our Invisible (Manchester) team is excited to create new connections and use monies raised through this campaign for a project in the city. They will decide what is needed most to support those affected by homelessness.

Our Progress so Far:

We can't begin to thank everyone over in the Isle of Man for the success of this project so far. The overwhelming response has been more than we could have imagined - Danny feels like a local celebrity with the number of books he's signing! Finally, we want to say a huge thanks to TQC Ltd who have already contributed significantly to the project.

Stay In The Loop:

2020 has been a year like no other. This campaign shows that in times of uncertainty we can pull together, connect with others and support those in need. If you'd like to be kept updated with news on our Manx Supporting Mancs project, scan the barcode below.

An atmospheric and historical city with its roots stretching right back to Roman times, York is an enchanting destination which boasts an array of attractions to excite, no matter what your interests. In fact, it is said York has more attractions per square mile than any other British city. So, join us today for our beginner’s guide to this magical city. And while you’re with us, be sure to check out our Walking Tours in York. Invisible Cities is a social enterprise dedicated to providing tour guide training and jobs for people who have been affected by homelessness. All of our tours are led by guides who possess a wealth of stories and a love for their city.

Roman fortifications, medieval market places, Georgian splendour: York is a city that fires the imagination. Much of central York is pedestrianised, making the city very walkable and absent of the inner city smog associated with other large cities. And with a population of just over 150,000, York is large enough to be vibrant without visitors ever feeling overwhelmed by crowds and congestion. Of course, all visitors should reserve time to visit the city’s medieval cathedral, York Minster. As one of the world’s largest Gothic buildings, this 800-year-old masterpiece is an awesome spectacle that will leave you wondering just how medieval builders could construct something of this scale. Elsewhere, visitors can tour the city by walking its surviving Roman and medieval walls, stroll along the waterside of the River Ouse, or exploring the grandeur of York’s Georgian architecture. Visitors with an interest in architectural history will enjoy our Health And Wealth of York walking tour.

York is a Foodie Haven

York is an excellent destination for food lovers, particularly those with a sweet tooth. While much of the success of Britain’s industrial revolution lay in textiles, York is famous for its long history of chocolate production. In the 19th century, chocolate guaranteed York its economic security and many of the city’s residents worked in chocolate factories. Iconic confectioners Rowntree and Terry’s both have their origins in the city and their stories are told in York’s Chocolate Story, a popular museum of chocolate located within the city centre. Aside from chocolate, the city has a burgeoning coffee shop culture with local independents like Bean & Gone, Everett’s, and Brew & Brownie serving top quality coffee and food. And what trip to York would be complete without visiting York institution, Betty’s? This iconic teahouse is a famously one of the best places in the city for taking afternoon tea.

York is a History Lover’s Paradise

Alongside the aforementioned Roman ruins and medieval architecture, history lovers can delve further into the past at one of the city’s fantastic museums. With the first train leaving York in 1839, the city played a starring role in the history of rail travel and it’s fitting that today the city is home to the world’s largest railway museum. For travellers fond of rail history, our guide Gemma takes our York Railway Tour dedicated to the subject, which can be extended to include the museum. The city is also proud of its Viking past which is expertly brought to life at the Jorvik Viking Centre (Jorvik being the old Norse name for the city). Described as an experience rather than a museum, the exhibits found in the Viking centre involve Viking relics, models developed with facial recognition technology, and even aromas designed to give you an insight into how life would have smelled in a Viking settlement! Finally, the York Castle Museum offers guests an excellent insight to various chapters in the city’s more recent past –– the Victorian sweet shop is especially enjoyable.

York is a Great Base for Further Adventures

Some things never change. York was prized by both the Romans and Vikings for its location and today it remains a well-connected city that presents travellers with a range of choices for day trips. York is a gateway to some of the most beautiful scenery in England. Take a tour from the city centre and explore the stunning Yorkshire Dales National Park. With rolling hills and quintessentially English villages and hamlets along the way, this is a wonderfully idyllic part of the world. Take a ride on a restored steam train out to the famous coastal town of Whitby. Or, if you haven’t had your fill of historic sites in York, take a trip out to the haunting ruins of Bolton Abbey, a 12th century monastery that fell victim to the closure of the monasteries under Henry VIII.

Here ends our beginner’s guide to magnificent York. We hope this guide has inspired you to make the trip to this beautiful Yorkshire city. If you have any comments or suggestions for us, please do not hesitate to contact us, we’d love to hear from you.