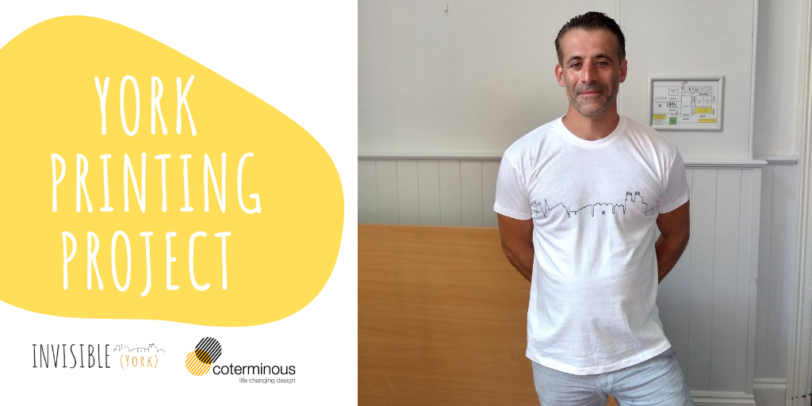 The team at Invisible (York) have been busy setting up a new initiative to design and print t-shirts. The project called Coterminous, brings together established artists and designers with homeless people, ex-offenders and former drug users to create a unique range of t-shirts. Those participants are not only involved in the design process, but also in the printing, distribution and marketing, to create a variety of employment opportunities. Each t-shirt celebrates one of our Invisible Cities on organic fair trade cotton. We interviewed Kenny at Invisible (York) to tell us more!

Where did the idea to produce T-shirts come from and what inspired it?

From an early stage, Good Organisation (Invisible Cities' partner in York) realised that not everyone engaged by the Invisible Cities project had the confidence to act as a tour guide or necessarily wanted their homelessness to be publicly known, and with that in mind, we set up a number of smaller initiatives to support those individuals.

That included an arts based self-advocacy project called 'Outside Influence’ where we also explored a number of options to ensure that it could become financially self sustaining. In order to achieve that, we subsequently invested in a DTG printer to design, print and sell t-shirts. We had initially intended the project to produce a range of products related to local history and heritage, but the remit of the project quickly became much broader, so we set up a separate trading entity to ensure that our underlying tourism related mission wasn’t diluted. The new t-shirt project is called Coterminous, and while it is a separate Community Interest Company, it retains strong links to Good Organisation and Invisible (York).

How are they done in partnership with Invisible (York)?

What is the printing process? How are people taking part?

Coterminous is a collaborative project bringing together established artists and designers with homeless people, ex-offenders and former drug users to create a unique range of t-shirts. Those participants are not only involved in the design process, but also in the printing, distribution and marketing, so we’re creating a variety of employment opportunities, with surplice profits also being used to create other forms of support that is specific to the individual needs and personal circumstances of those involved. The shirts are printed on organic fair-trade cotton, so we hope to maintain an ethical supply chain to amplify the social impact of the project.

The print process uses digital print technology, which means we can print items on an order by order basis and dispatch them directly. That’s meant that a number of small local charities have already been able to produce fundraising t-shirts with no initial financial outlay. Before we even formally launched the service, a York based community venue used the service to raise £2000 to keep them afloat during the Coronavirus pandemic, which was also a great opportunity to train those we support in the manufacturing process.

Anyone interested in buying t-shirts or having their own designs produced can visit the website at www.coterminous.co.uk or connect with them via social media @CoterminousCIC