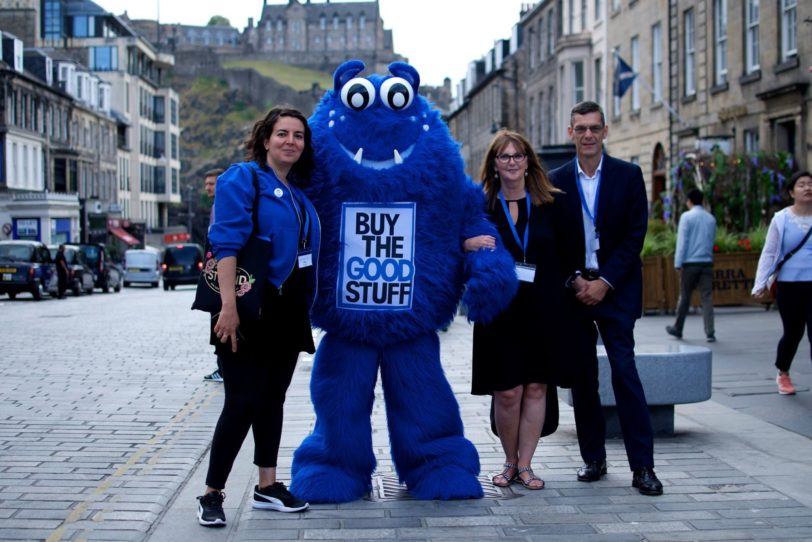 A new digital audio tour, downloadable from the Geotourist app to visitors’ smartphones, will help them discover how to spend their money positively in Edinburgh whilst exploring the city.

The tour - a digital first - introduces visitors to some of the city’s social enterprises as they take in the iconic sights and tell some of Edinburgh’s lesser-known tales.

The tour has been curated by Invisible Cities, the social enterprise that trains homeless people to be tour guides, and has been produced in partnership with Edinburgh Social Enterprise and Geotourist, the revolutionary mobile platform and app for the world’s stories.

The founder of Invisible Cities, Zakia Moulaoui, said: “The tour is a snapshot of some of the great social enterprise initiatives we have in Edinburgh. It allows people to be inspired by some of the work going on while exploring the city in their own time.”

Starting in the Grassmarket, the tour passes Edinburgh Castle, wanders through Princes Street Gardens, Rose Street and George Street before returning to the Grassmarket. The tour takes people on a journey that features 5 social enterprises and narrates some of the city’s stories along the way. Using GPS technology, the app pinpoints where users are and triggers content as they pass by points of interest.

Zakia said: “We’d be delighted if further social enterprises came forwards and wanted to become part of the tour. There are about 5,600 social enterprises in Edinburgh which collectively contribute 2 billion pounds to the economy, employing over 80,000 people full time.”

Zakia continued, “Scotland is one of the best places in the world to start a social enterprise, from funding to peer support. There is a wide network to help and accompany you along the way.”

The tour so far includes the following social enterprises:

● The Grassmarket Community Project which supports vulnerable adults and homeless people, operates a café and even creates a tartan for those that don’t have one.

The tour is of interest to new and returning visitors to the city as well as local residents and those who work or have an interest in the Social Enterprise industry. The tour is free, with listeners able to support the work of Invisible Cities through a ‘Donate Now’ button included on the tour. The Geotourist app itself is free to download from the App Store or Google Play. Visitors are encouraged to visit the social enterprises on the tour and find out more about supporting them via their individual websites.

CEO and Geotourist founder, Shaon Talukder, who created the Geotourist concept said: “We knew that when we first met Zakia that it was a Geotourist objective to promote the wonderful work Invisible Cities is doing. We are delighted to provide the technology to support this project and help to use the city’s stories to help do social good. Geotourist’s reason for being is to tell the human story and projects like this are a particular privilege to give a home to.”

Amongst its awards and accolades, Geotourist is proud to have been awarded ‘Gold’ at the International Tourism Awards at the World Travel Market within the LGBTQ category for a tour in Denver, USA. Working in collaboration with the AARP, the tour tells the story of the history, battles and celebrations of this community. Invisible Cities is the regional winner of the Thistle Award for Innovation in Tourism.

Geotourist is proud to support Invisible Cities by combining storytelling and tourism to help promote social good. The tour offers visitors a way to get to understand the city that they are in beyond the traditional tourism message and offers travellers who champion responsible tourism an opportunity to leave a positive imprint that makes a difference to local lives.

Further collaborations between Invisible Cities are planned to support its growth in cities such as Glasgow, Manchester and York.