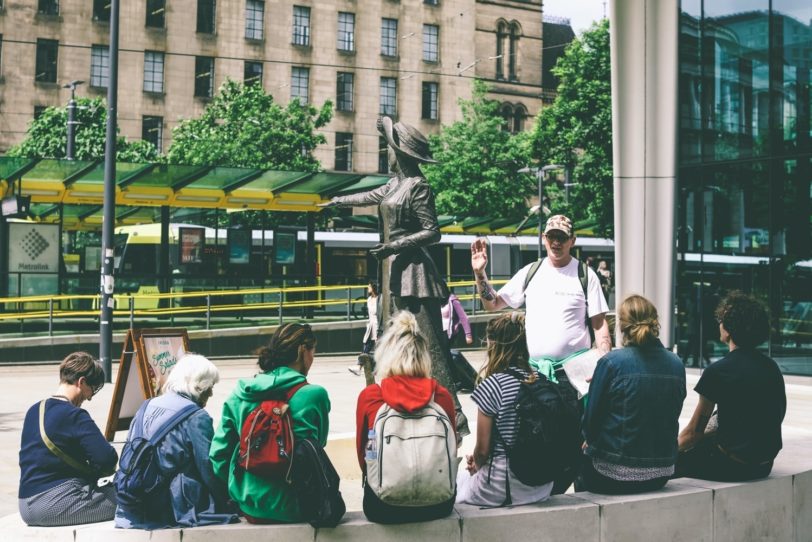 Invisible (Manchester) is delighted to announce the launch of their new tour guide, Laura. The social enterprise has been running tours in Manchester since October 2018 when they launched their first tour guide, Danny. As part of the wider Invisible Cities network, their purpose is to train people who have experienced homelessness to become walking tour guides of their city.

Laura’s tour is called ‘Back in Time’, in which she shares her passion for the past and present of Mancunion women and the city’s culture, architecture, criminal history and food scene. As as a transgender woman, Laura’s tour builds bridges between her past and the person she has become today. She hopes to educate locals and tourists alike, to understand the difficulties of living on the streets as well as being transgender in order to help people gain an insight on the issues surrounding homelessness.

Laura has been training with Invisible (Manchester) since January. During Laura’s initial meeting with the Invisible (Manchester) team she insisted that she would never be able to speak in front of more than three people because she was too shy. Through the training process, she has rebuilt her self-confidence and led her first practice tour of ten attendees on June 11th.

One of the tour attendees on the practice tour said “The tour was real, honest, and human, and Laura's excitement and eagerness for what she was doing was infectious! I really enjoyed the tour and seeing Manchester through a different perspective.” Laura said that “Since starting with Invisable Manchester I have been supported to become visible. Telling my story about my past has helped me grow as a person. And letting me to become the new me. The group itself is invaluable, educating the public about homelessness. And for this I am happy to be part of the team. And thankful that I am.”

Alice, Head of Invisible (Manchester) says “Laura has excelled! Her enthusiasm is reflected in just how fast her notebook was bursting with research, facts and ideas she collected to share with tour customers. We feel privileged to have her as part of the team, she has contributed an exciting and special new dynamic to Invisible (Manchester).”

Zakia, Founder of Invisible Cities says: “We are so proud of Laura and all the energy, efforts and commitment she has put into Invisible (Manchester) to date. Hearing about her development and her plans for the future is the reason why Invisible Cities was set up in the first place. We can’t wait for her to thrive and represent us in front of customers from around the world.”